In the past two years, 3D-printed plastic mould inserts have revolutionized the mould manufacturing in the plastics processing industry.

Modern 3D- Technology Can Help to Save Mould Costs

If only small batch sizes of a plastic part are required or if the component is still in the development phase, modern 3D- technology can help to save mould costs. Instead of a complex construction of expensive steel moulds, more flexible and cost-efficient solutions are required, especially in the prototype construction and in the increasingly individual designs of the components.

However, a direct part production from the 3D-printer differs significantly from an injection moulding part. Thus, for example, the physical properties of a 3D-printed component differ considerably from injection-moulded parts. The solution is 3D-printed mould inserts with which the plastic parts can be manufactured very cost-effectively in a cassette mould.

Based on the CAD data of the plastic part, the print data of the mould inserts can be processed accordingly and 3D-printers create the mould. Depending on the size of the components, this can already be done within minutes, while longer processing times are required for larger designs. Nevertheless, these mould inserts are designed much faster and more cost-effectively than their “steel competitors”.

From the plastic- to the metal mould

In the past two years, 3D-printed plastic mould inserts have revolutionized the mould manufacturing in the plastics processing industry.

Low mould costs thanks to 3D-printed mould inserts as well as the fast implementation of modifications are the decisive advantages for the users. A “drop of bitterness” is, however, the lifetime of these moulds. High temperatures of the materials and large injection pressures affect the mould inserts more significantly and the operating times of the 3D-printed moulds dwindle. Especially in the case of small batches and average quantities, many users are looking for a more reliable solution. This solution is offered by the use of 3D-printed metal mould inserts. Higher stability and the possibility of a partly required mould temperature control / -cooling are provided with these metal mould inserts and thus they represent the next upgrade level of the additive production. 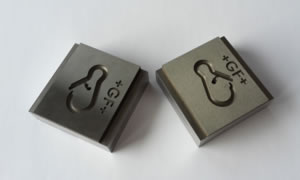 A good preparation is the be-all and end-all

However, the layer-by-layer print of the plastic- or metal-mould inserts is clearly different in terms of preparation and planning. In the case of the metal mould inserts a large number of additional elements have to be taken into consideration in advance. For the complex and highly 3D-dimensional parts, temperature control channels and their connections must already be provided during the planning stage of the mould inserts. In the case of the metal-printed moulds, the parting line still has to be processed, since the structure of the surface of the moulding part comes from the printing process. For the achievement of a defined and desired surface, this additional processing step is necessary.

The fact, that the technological and monetary expenditure of the 3D-printed mould-inserts is manageable and much more efficient for small quantities than the conventional steel moulds, is not fully applicable for metal mould inserts, depending on their design and complexity. Already during the design phase of the moulds or of the metal mould inserts the decision should be made on a metal mould insert or on a conventional aluminum or steel mould. The engineer should be familiar with the capabilities of 3D-technology to find a good and affordable mould in light of the additional possibilities.

Since the company was founded in 1968 far more than 45,000 Injection Moulding Machines have been delivered worldwide. The privately owned company continues to put special emphasis on engineered performance and high-class "made in Germany" workmanship.